The Sport of Triathlon

Triathlon is a continuous endurance activity comprised of three of the world’s more popular participation sports: swimming, cycling, and running. Participants first swim a set distance in a lake, ocean or a pool, then bike a set distance and finish with a run. The time between each activity – called the “transition” – is also timed as part of the race, creating a continuous contest. Introduced in the early 1970’s in California, the sport traces its roots to the Hawaiian Ironman™ Triathlon held each year in Kona, Hawaii. The Ironman is a rigorous endurance test consisting of a 4 km swim, 180 km bike, and a marathon run (42.2 km).

The sport has changed a great deal since the 1970’s. Today, there are over six million athletes participating worldwide, an international federation, almost 100 national federations, and events held in a wide range of distances.

In Canada, triathlons covering all distances are staged across the nation — from grassroots charity events to international caliber races. In fact, in 1992 Canada hosted the World Championships in Muskoka, ON, while Drummondville, QC, Whistler, BC, and Corner Brook, NF have each hosted World Cup events. The annual Ironman™ Canada triathlon held in Penticton, BC, attracts 2,000 athletes each year and is one of the most renowned long-distance races in the world. Triathlon Canada sanctions an annual Canadian Triathlon Championship that is the premier triathlon in Canada. It is estimated that nearly 50,000 Canadians compete in a triathlon each year.

Triathlon is not just a sport, it’s a way of life. Training and a healthy lifestyle become part of a triathlete’s everyday routine and this usually connects them socially with like-minded people.

It is the responsibility of everyone in triathlon to ensure that all participants, whether they are competitors, officials, coaches, or administrators, conduct themselves in a dignified and professional manner that reflects the true spirit of the sport.  The sport of triathlon offers the opportunity for all athletes to develop physically, emotionally, and socially by fostering attributes such as:

Triathlon emphasizes respect for all people. 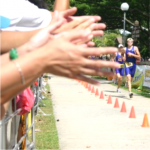 The goal of triathlon is finishing the event.  When athletes finish they turn around and cheer the next competitor to the line.  Although triathlon is competitive it fosters mutual respect through a lifestyle focus and commitment to training .  In multisport events, everyone who makes the effort to reach the finish line is a winner.  People from different countries, cultures, and regions compete together and learn to honour all fellow athletes.

It’s the people in triathlon that make the sport unique and fun.

There are people from aged five to over 80 years in triathlon events.  Participants  enjoy the challenge of testing their skills, endurance, and mental toughness.  It is a perfect family sport. 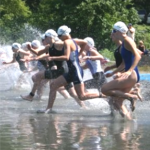 The triathlon family of events is inclusive.

Anyone can participate in a multisport event.  Any type of equipment is acceptable, as long as it is safe.  For example, many children, youth, and novice adults use mountain bikes or commuting bikes for the cycle component.  There are categories for AWAD competitors (Athletes With A Disability) and age groups up to 80+.  Below is a list of common event distances in Triathlon for adults (top table) and youth up to 19 years (bottom table).

Triathlon offers something for everyone, whether athletes are trying their first Multisport event or embarking on their tenth year of Iron distance racing.

Note—these distances denote MAXIMUMS in each age group.  Athletes may complete events that are shorter than the distances listed, but may not exceed these distances in competition.

*Ages are listed as of December 31 of the current race season.

The triathlon family of events has something to offer everyone. Athletes, referred to as triathletes, can be people of all ages, abilities, and backgrounds. Triathlon has categories for athletes aged five to beyond 90, for Athletes With A Disability (AWAD), and for recreational or elite competitors.  In triathlon there are two distinct areas of competition: Elite and Age-group. 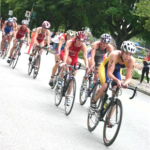 Elite competition is characterized by “draft legal” cycling.  This means competitors may ride directly behind or beside other competitors during the cycle component of the event.   In age group competition there is no draft legal cycling. 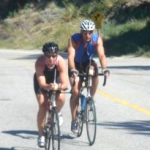 This form of competition enables competitors to compete at their individual level and against people of the same age.   In age group competition, participants primarily compete for the love of the sport and also to challenge themselves while enjoying the thrill of participation and competition.

Age group competition is “non-drafting,” meaning that competitors,  must maintain a specified distance from other participants during the cycle component unless they are overtaking.

With small events or events in developing areas or countries, age groupings may cover ten years, such as 20 -29, 30 -39 and so on.   Generally, age group competitors compete for prizes, while award money is offered in the elite categories.

There are four main events in the triathlon family: Triathlon, Duathlon, Aquathlon, and Winter Triathlon.